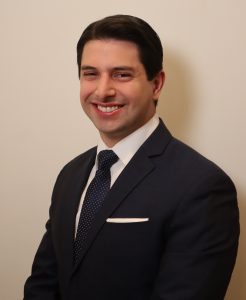 Neil A. Carousso is an entrepreneur and award-winning journalist who operates a full-service production and events company and covers local and business news for WCBS-AM New York where he has earned the recognition as a “30 and Under Superstar” by Radio Ink Magazine.

Neil has secured interviews with celebrity entrepreneurs, namely “Shark Tank” investors Barbara Corcoran, Daymond John, Robert Herjavec and Kevin O’Leary –  and other business leaders – who have shared their wisdom and advice with the WCBS business audience.

Click the hamburger button on the top right of the YouTube playlist above to see more Small Business Spotlight videos.

Click the hamburger button on the top right of the YouTube playlist above to see more Small Business Comeback Tour videos.

Neil helped launch a new weekly radio program with WCBS anchor Lynda Lopez in June 2020. The 880 Weekly Rewind takes a deep dive into the most consequential stories of the week, airing live Friday evenings at 7 PM. In addition to producing the show, Neil often contributes original reporting for “Rewind.” His video and audio segments are published on WCBS 880’s digital platforms.

A special 880 Weekly Rewind show on January 8, 2021 covered the deadly insurrection at the Capitol two days prior. Carousso and Lopez won a prestigious Gracie Award for “Chaos in the Capitol – A Nation Divided.” This special program was nationally syndicated on Audacy stations.

On behalf of his own company, Carousso Enterprises, LLC, Neil produces, directs and edits endorsement and sponsored client videos and events for Audacy. Neil works with Boomer Esiason, Phil Simms, Howie Rose, Scott Shannon, Steve Schirripa and other personalities and celebrities on projects with Investors Bank, Dime Community Bank, the New York Mets, The Eye-Bank for Sight Restoration and other clients and partners.

Carousso Enterprises is Neil’s production company that specializes in producing corporate and sponsored videos and premier in-person and virtual events. Neil has more than a decade of experience in executive producing multi-media content and hosting live shows for major market media companies and national brands.

Neil was the executive producer of the Mooch and the Mrs. with Anthony and Deidre Scaramucci podcast on RADIO.COM for its one and a half year run that included on-location programs at Scaramucci’s SALT Conference in Las Vegas in 2019 and the Hunt & Fish Club in Times Square with prominent guests including Chris Christie, Maria Menounos, Mark Cuban and Brian Cashman.

Neil is a passionate and energetic leader who uses his skills in communications, business, and marketing to make a positive impact in people’s lives. He has advocated for veterans’ healthcare and tells many of their stories in his reporting. He also works with several veterans’ organizations and volunteers at the Northport VA Medical Center on Long Island.

Neil got his start in media at a young age. He created a school newspaper in junior high school before becoming the public address announcer for Saint Francis Preparatory School in Fresh Meadows, Queens at the age of 12. The “Voice of Saint Francis Prep,” developed SFP TV to stream school events and games. Neil filled various roles at SFP TV, including executive producer, play-by-play announcer, news anchor and reporter.

Click the hamburger button on the top right of the YouTube playlist above to watch games, reports, school news, events and promos from the SFP TV archives.

As a high school student, Neil spearheaded marketing and public relations campaigns, inking a sponsorship deal with the Queens Courier newspaper and a strategic media partnership MSG Varsity where he also worked as a guest play-by-play announcer alongside Rich Ackerman.

At Hofstra University from 2013-2017, Neil was a manager, producer, and on-air talent at its college radio station WRHU-FM, which has reach into New York City. Neil recruited, coached and nurtured student broadcasters, led the morning drive news team, and executive produced and hosted on-location programs at the Belmont Stakes and the National Baseball Hall of Fame induction ceremonies in Cooperstown, NY for three consecutive years.

With the mentorship of legendary broadcaster Ed Ingles, Neil transcended WRHU’s variety morning talk show into a substantive and entertaining format, hosted by well-informed and engaging Hofstra student hosts, including himself. The show allows for lively news, sports and political talk with notable guests plus breaking news coverage.

In addition to his role as Morning Wake-Up Call producer and host, Neil produced and anchored “Newsline,” the Associated Press award-winning evening news broadcast. He also reported on business news, which earned him a national ranking as a reporter from the prestigious Hearst Corporation.

He reported and produced coverage of the 2016 United States presidential election for WABC-TV New York, CBS New York, and independently via Carousso Enterprises’ platforms. Neil also worked at Fox News Channel in New York City during the 2016 election year, producing segments for “The Five,” “The Greg Gutfeld Show” and “Justice with Judge Jeanine.”

Neil graduated from Hofstra University in 2017 where he earned a Bachelor of Arts Degree in Journalism with Minors in Political Science and General Business. He was a Provost Scholar Award student. Neil resides in New York City.